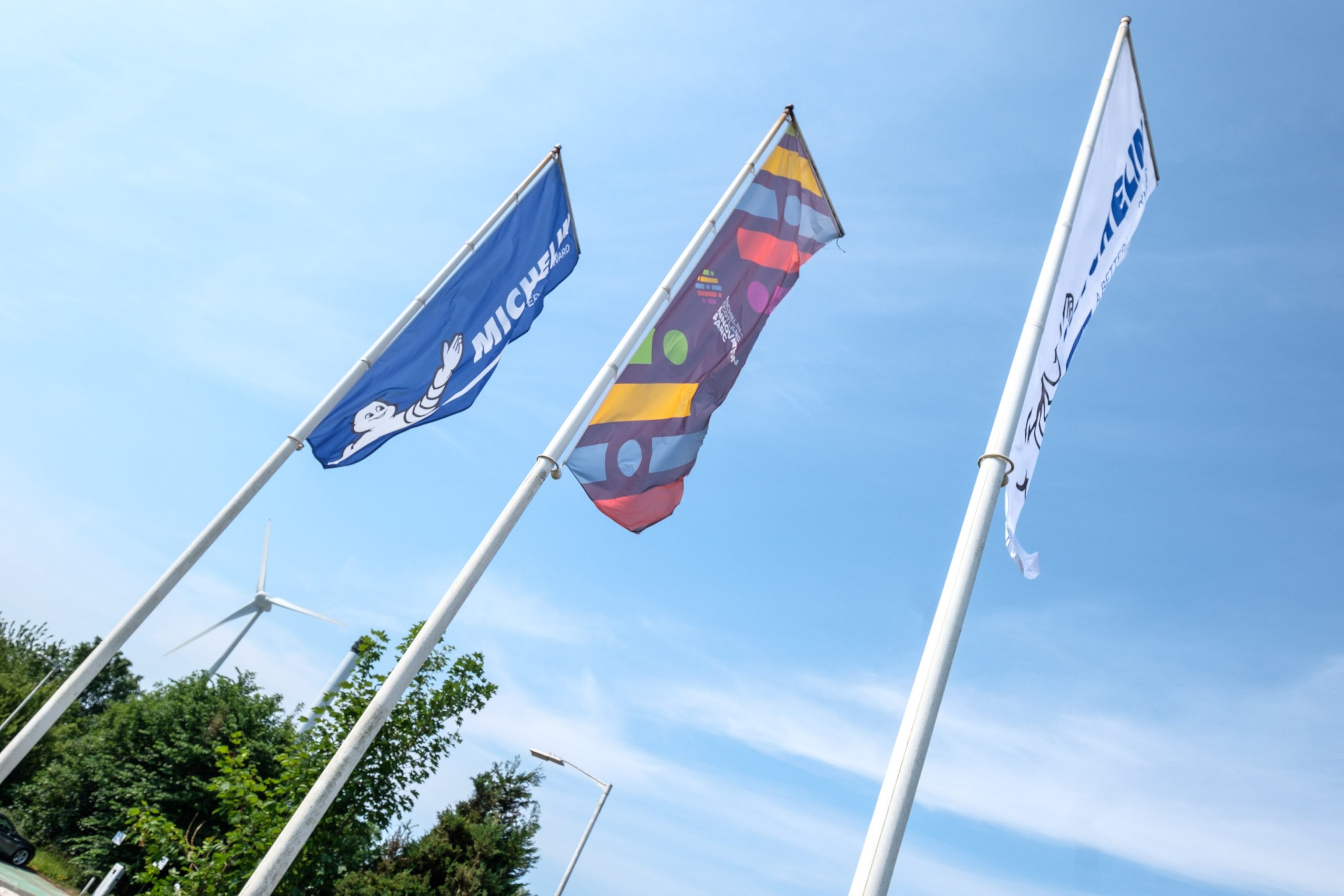 MSIP, a joint venture between Michelin, Dundee City Council and Scottish Enterprise, is a world-class Innovation Parc in Dundee for sustainable mobility and low carbon energy that will drive growth and diversity in the Scottish economy while addressing the global climate emergency.

Following an international executive recruitment process, the MSIP Board is delighted to appoint and welcome Greig Coull as the new CEO of MSIP. Mr Coull is expected to start his new role in the summer.

Originally from Dundee, Mr Coull has held several senior executive roles in Michelin including at their HQ in France and brings extensive leadership and commercial experience across Manufacturing, Marketing and building Strategic Alliances, all critical elements to help make MSIP a continued success.

As Mr Coull takes over the reins from the interim CEO John Reid, further appointments have been made to build the MSIP team to manage the Innovation Parc going forward, to support current, future and prospective tenant companies and also the development of the Skills Academy and Innovation Centre.  These roles include the management team, finance, operations, health and safety, marketing and communications as well as operational security team and resources to support the Skills Academy.

In total 20 new jobs have been created to form the MSIP Team, and 15 of these appointments are from ex Michelin Dundee employees.

Arcola Energy, a London Headquartered leading specialist in hydrogen and fuel cell technologies, particularly focused on heavy vehicles applications, including refuse trucks, buses and trains,  aim to create a new engineering, manufacturing and aftermarket facility at MSIP which will employ 30 people in the coming year, and up to 100 in the next 3 years.

Low Emissions Resources Global (LERG), a New York-headquartered chemical engineering business focused on ground-breaking P-SOEC electrolyzer technologies to create a ‘greener tomorrow’, will initially bring 10 jobs to the Innovation Parc, with the ambition to create up to an additional 15 jobs at MSIP over the next two years.

MEP Technologies, designers and manufacturers of high technology battery systems for portable industrial storage and automotive electric vehicle systems, will relocate from its existing Dundee premises to accommodate the growth of its business. It will initially bring 10 jobs to the Innovation Parc, with plans to create up to 10 new jobs at MSIP over the next two years.

The companies intend to be operational at the Innovation Parc by the end of the year.

In addition to the first three tenant companies, MSIP is pleased to announce that is it at advanced stages of discussion with several other companies in low-carbon industries which intend to locate at MSIP in the near future.

These companies, operating across fuel cell technologies, conversion of vehicles to electric drive trains, and renewable energy, could create an additional 200 jobs at the Parc within the next 12 months.

AMTE Power, a London-headquartered battery manufacturer has also talked publicly of its intention to open a large site, creating up to 300 jobs, at either MSIP or one other preferred site.

Plans are progressing well to further develop MSIP’s Skills Academy and Innovation Centre, with infrastructure work scheduled to start in the next few weeks.

John Reid, CEO of MSIP said: “At Michelin Scotland Innovation Parc we want to attract companies that are innovative and leading the way in sustainable mobility and low carbon energy, to develop new products and processes that will tackle the climate emergency head on.

The companies announced today – Arcola Energy, MEP Technologies and LERG – show a real mix of MSIP’s focus. They have chosen to locate at MSIP because of the great offer we have. It’s exciting news and an excellent start at building a world class Innovation Parc and creating hundreds of jobs in Dundee.”

Jeff Olear, Executive Chairman of Low Emissions Resources Global said: “LERG is excited about the possibility of being a part of the MSIP community.  MSIP’s vision to be globally recognized as the center of excellence in sustainable mobility aligns perfectly with our vision to create affordable green hydrogen to drive that industry well into the future.”

Stuart Morrison, Managing Director of MEP Technologies said: “As a new technology company, why would we be located anywhere else?”

Dr Ben Todd, CEO of Arcola Energy said: “We are delighted to see MSIP developing so quickly to become a leading hub for low carbon and zero emission mobility. All the ingredients are being brought together to create something truly special at MSIP, which aligns with ever-stronger local, national and international commitments to build a green future. We very much look forward to being part of the MSIP journey, as we rapidly ramp-up our activities in Scotland.”

Economy Secretary Fiona Hyslop said: “Ever since the closure of Michelin Dundee was announced in November 2018, we have worked collaboratively with Michelin and partners to secure a long-lasting future for the city’s skilled workforce, and for its innovation and manufacturing heritage. That legacy – Michelin Scotland Innovation Parc – is taking another and significant step forward with the announcement of its first three tenants, each one an exciting venture that uphold the core values of the vision for the site. I am also pleased that Greig Coull has been appointed as the new Chief Executive Officer of MSIP. Greig brings a wealth of manufacturing experience and, having worked at Michelin Dundee at the beginning of his career, will, I have no doubt, drive forward these values.

“Covid-19 has been an unprecedented global crisis which has fundamentally changed every aspect of our lives, but it has also presented us with an opportunity to re-imagine the Scotland around us, and to begin building a greener, fairer and more equal society and economy. Today’s announcement takes the Innovation Parc a step closer to realising its potential and helping to drive our green recovery from Covid-19 and on to becoming a net-zero society.”

Dundee City Council leader John Alexander said: “These are important milestones in the MSIP journey. What was once an ambitious vision is now becoming a reality, with the first tenants preparing to come to the Parc, jobs being created, and a new CEO appointed.

“The progress so far at MSIP is testament to the genuine commitment and hard work of all involved. However, this is only the start. There will be no let-up in our efforts to deliver further employment and investment opportunities at MSIP.”

Jerome Monsaingeon, Michelin Group representative on the MSIP board, said: “The Michelin Group made a commitment to the city of Dundee and its people, and the Michelin Scotland Innovation Parc is that commitment made real. Michelin, the Scottish government and the City of Dundee forged a partnership built on collaboration and a shared vision for the future of mobility. That approach has delivered international investment and employment – even in the turmoil of a global pandemic. The MSIP is well-established, with a growing reputation, and I am convinced it will be the catalyst for economic growth in Dundee and beyond.”

Scottish Enterprise Chief Executive Steve Dunlop said: “There has never been a more crucial time to look to the future, particularly as we move out of the Covid pandemic and move forward with the climate change agenda.

“The Michelin Scotland Innovation Parc will be a pivotal asset in the fight against the climate emergency, and Arcola Energy, LERG and MEP Technologies will play a key role in helping achieve Scotland’s ambitious net-zero emissions target.

“They will be among the employers of the future in Dundee and will help create a greener and fairer Scottish economy.

“This is testament to the exceptional facility that is being developed here at MSIP. We at Scottish Enterprise and our partners have been incredibly proud to see the plans for the parc grow over the past year and those ambitions are now becoming reality.”